Yesterday I listened to a radio interview with Convention of States Senior Advisor, Senator Jim DeMint, who was a guest on the Nora Firestone Show. The concepts presented were so well articulated and crystal clear, I thought I'd share this terrific interview with you all! 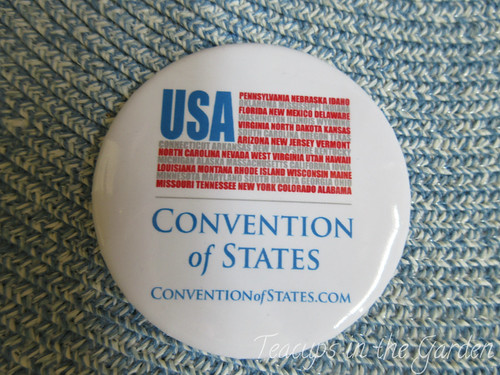 While serving in Congress from 1999-2013, Senator Jim DeMint of South Carolina struggled to fight for freedom, limited government, and fiscal responsibility. He refused to become a Washington insider. In June 2017 DeMint became Senior Advisor for the Convention of States Project. “I’ve finally realized the most important truth of our time: Washington, D.C. will never fix itself. Article V is the only solution.” –Sen. Jim DeMint

During the interview with Nora Firestone, Sen. DeMint clearly articulated key points about Convention of States.

DeMint explained how Article V of the Constitution discusses the amendment process. Not only does Congress have the power to propose amendments, but so do the states through the People. The Framers knew the time would come when the federal government might become so large, it would not restrain itself. Hence, the Framers gave the states the power to rein in Washington DC.
DeMint further explained that America will become bankrupt if we do not rein in Congress’ habit of spending and borrowing. Furthermore, the expanding power in Washington DC invades peoples’ lives. Although America has a long history of past conventions, this will be the first one held under Article V.

“What if the states are equally as corrupt as Washington DC?” Firestone asked. DeMint answered that a runaway convention is next to impossible due to the nature of Article V. That is because an Article V Convention of States is merely an amendments convention. Only amendments are proposed. In order for that to happen, 34 states must call for a convention, while agreeing to the subject matter of reining in the federal government. The topic of the amendments, “reigning in the federal government” is what protects the Constitution. The Constitution was not written for an expanding government, but for a limited government. The Convention of States is not about arguing the first or second amendment. Rather it will clarify the original intent of the Constitution to the runaway federal leviathan in Washington DC. Proposed amendments will need to be ratified by 38 states.

When asked what the main objective of a Convention of States was, DeMint simply answered, “To save our country.” Washington DC refuses to balance the budget. More spending is projected for next year than ever in US history.  Currently there are no limits on what government can do or what they can spend. We need to change that with an Article V Convention of States.

Virginia Coalitions Director, Jim Bost, called in to the show to share how he became a volunteer for the very reasons spoken by DeMint. Bost had been increasingly discouraged by the out of control federal government before he came on board with Convention of States. He supports amendments for term limits as well as reining in the federal debt, which are germane to the Convention of States resolution. DeMint replied that Convention of States is all about restoring power to We the People.

Firestone then asked what long term effects would occur if we do not reduce the power in Washington DC. DeMint replied that quality of life would diminish, since freedom for the People become less as the federal government expands. It will become more difficult to create jobs, and opportunities will be killed due to an increase in regulation and taxes. There will be a lower quality of education. Insurance costs will continue to sky rocket. It will be harder for Americans to be successful. This is the opposite of what the federal government should be. Nora Firestone replied that if anyone wants to see what socialism or communism looks like, just visit one of their countries.

When Firestone asked why politicians don’t just limit their own terms in office, DeMint shared that at the September 2016 Convention of States simulation in Williamsburg, Virginia, an amendment was proposed for 12 year limits on federal officials. “It’s an act of mercy to bring them home after 12 years. Beyond that, they are no longer serving,” DeMint stated. The only way to Constitutionally pare back federal officials is through an Article V Convention of States.

“What is the allure of the swamp?” Firestone asked. DeMint replied that big players and big corporations want central control. “Absolute power corrupts absolutely,” DeMint stated. The lure of wining and dining alongside invitations to committees in return for favors, not to mention the millions of dollars spent to win elections, politicians are beguiled into power.

Convention of States Virginia Media Liaison, Brett Cole, was an in-studio with Nora Firestone.  He had an opportunity to directly ask Sen. DeMint how we should address campaign finance reform. DeMint replied it must be made transparent. All money in politics must be dealt with through a Convention of States to rein in the power. Washington DC runs our schools, our roads, our welfare programs. “Concentration of political power creates concentration of economic power.”  Firestone interjected that the money should remain with the tax payers.

When asked by Firestone how the average person would benefit from a Convention of States, DeMint replied that the quality of life would increase. There would be better schools. Because there would be more choices for healthcare, it would be affordable. Our roads would be free from regulation from the federal government. We would have welfare that actually helps people by getting them to where they no longer need welfare, instead of entrapping them into the system.  There would be more opportunities and career choices.

Currently Convention of States Project has 3 million supporters, and it continues to grow day by day. I, too, have become a volunteer. Currently I serve as Grassroots Coordinator for NoVA Central, and as State Communications Director. The results of this interview has been phenomenal, with lots of positive engagement.  At these links you can learn more, sign our petition, and  join our team.

Email ThisBlogThis!Share to TwitterShare to FacebookShare to Pinterest
Labels: Convention of States, Self-Government

Making it Easy to Hang Vignettes

So many lovelies...but how to actually hammer the nails in the right spots?