Last night there was a stunning sunset after the rain... 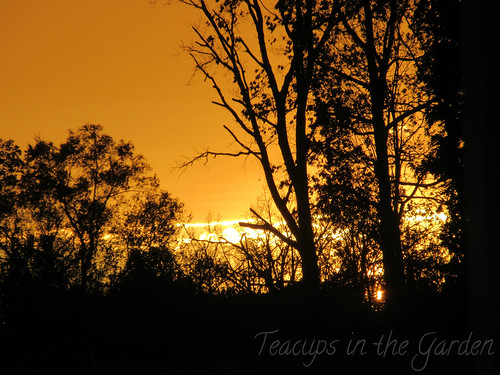 ...which produced a rainbow... 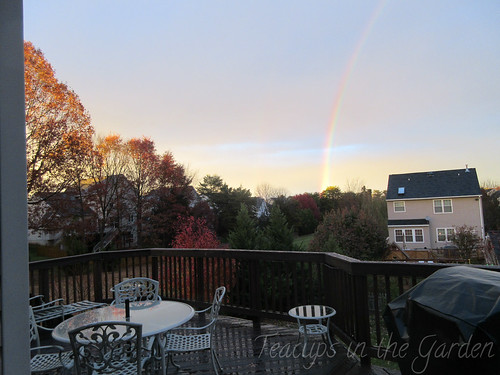 The view from our backyard is such we can see the entire rainbow, though I'm not sure that the right side is apparent in this photo. 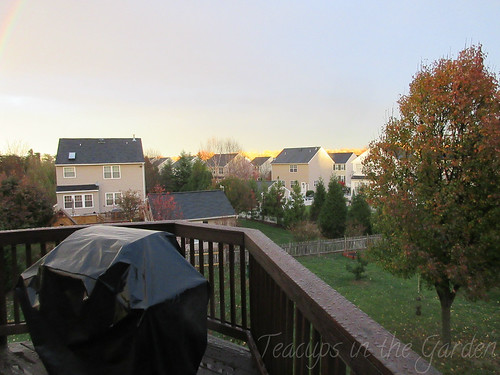 Most amazing was the typically dull dead trees in the distance that were lit as if by fire by the sunset...(note the dramatic difference in this post when I took photos of the supermoon a few days earlier) 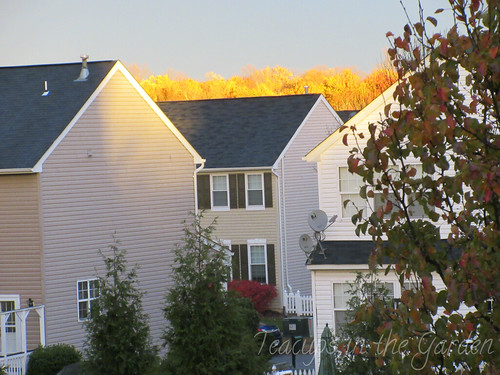 Close-up of the right side of the rainbow. 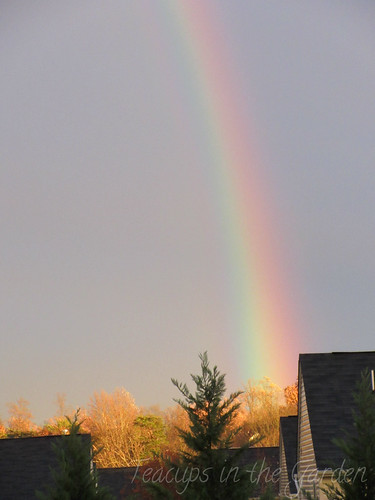 Posted by lahbluebonnet at 9:40 PM No comments: Links to this post

While touring the cemetery, markers showcase portions of a poem from a later battle, from the Mexican American War:

BIVOUAC OF THE DEAD

The muffled drum's sad roll has beat
The soldier's last tattoo;
No more on life's parade shall meet
That brave and fallen few. 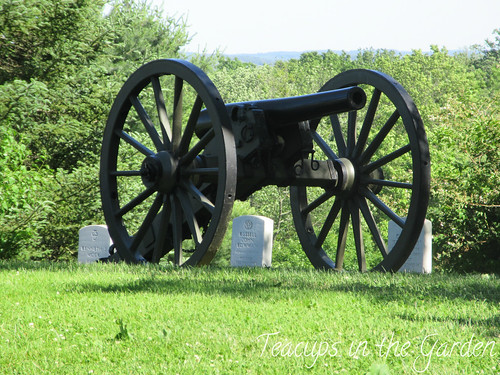 On Fame's eternal camping-ground
Their silent tents are spread,
And Glory guards, with solemn round,
The bivouac of the dead. 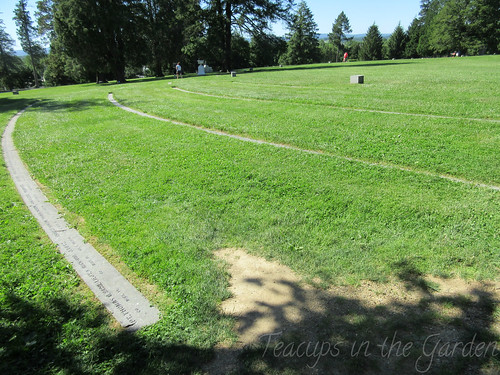 No rumor of the foe's advance
Now swells upon the wind;
Nor troubled thought at midnight haunts
Of loved ones left behind; 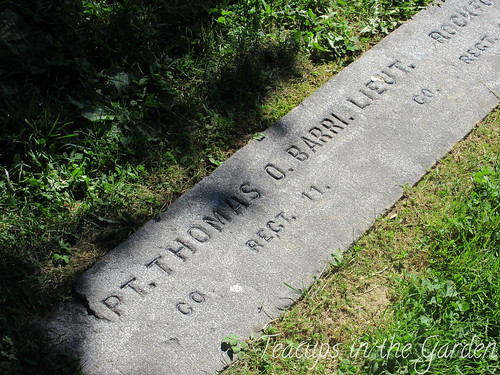 No vision of the morrow's strife
The warrior's dream alarms;
No braying horn nor screaming fife
At dawn shall call to arms. 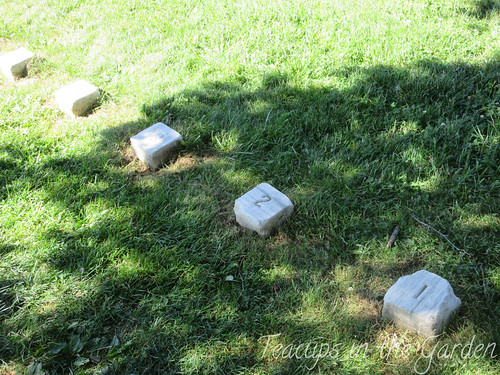 Their shriveled swords are red with rust,
Their plumed heads are bowed,
Their haughty banner, trailed in dust,
Is now their martial shroud. 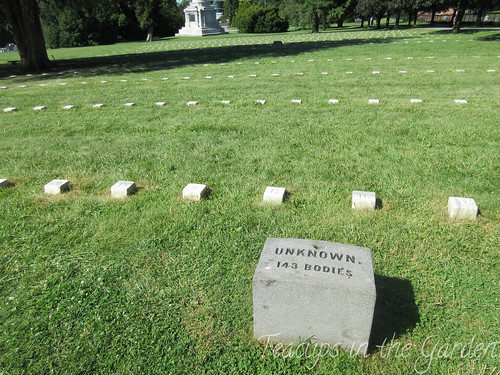 And plenteous funeral tears have washed
The red stains from each brow,
And the proud forms, by battle gashed
Are free from anguish now. 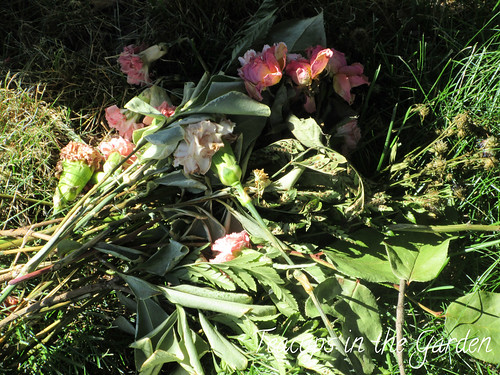 The neighing troop, the flashing blade,
The bugle's stirring blast,
The charge, the dreadful cannonade,
The din and shout, are past; 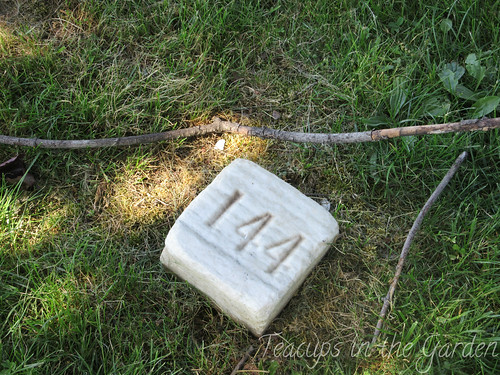 Nor war's wild note nor glory's peal
Shall thrill with fierce delight
Those breasts that nevermore may feel
The rapture of the fight. 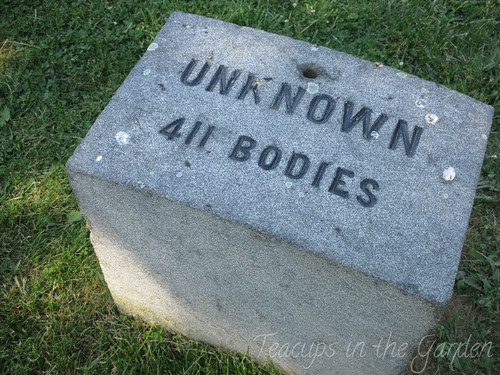 Like the fierce northern hurricane
That sweeps the great plateau,
Flushed with the triumph yet to gain,
Came down the serried foe, 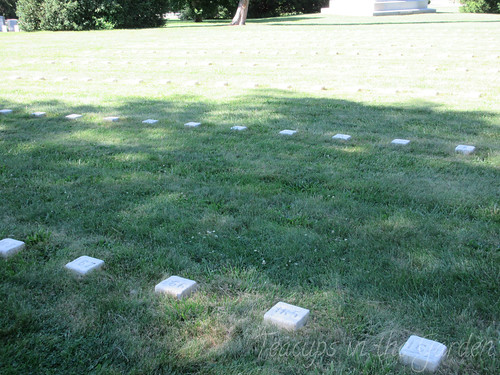 Who heard the thunder of the fray
Break o'er the field beneath,
Knew well the watchword of that day
Was "Victory or death!" 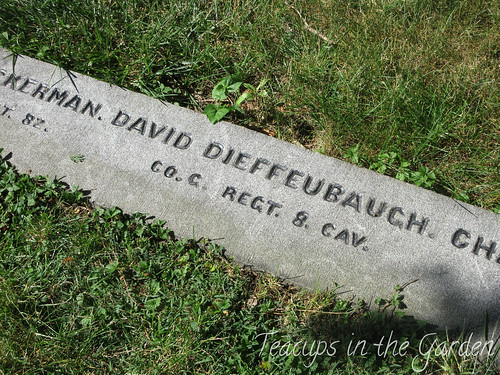 Long had the doubtful conflict raged
O'er all that stricken plain,
For never fiercer fight had waged
The vengeful blood of Spain; 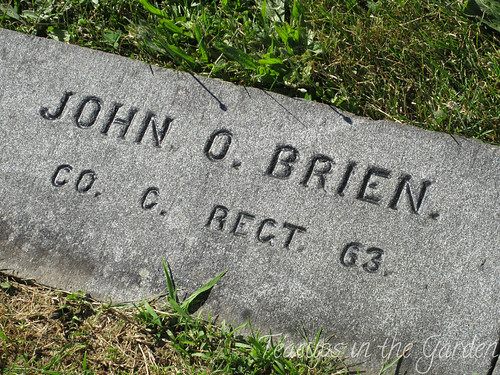 And still the storm of battle blew,
Still swelled the gory tide;
Not long, our stout old chieftain knew,
Such odds his strength could bide. 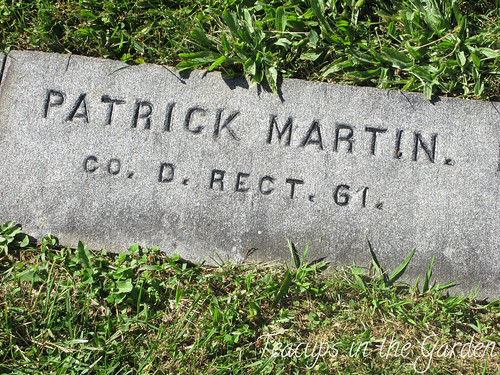 Twas in that hour his stern command
Called to a martyr's grave
The flower of his beloved land,
The nation's flag to save. 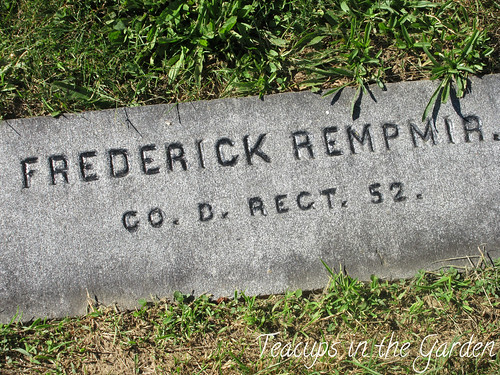 By rivers of their father's gore
His first-born laurels grew,
And well he deemed the sons would pour
Their lives for glory too. 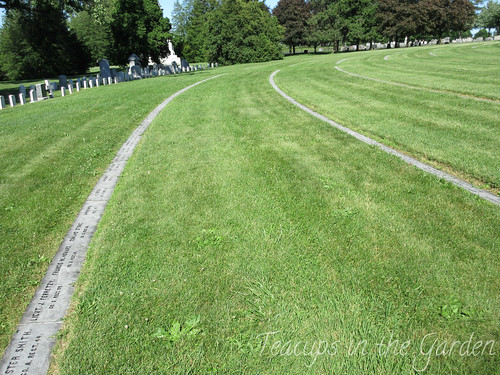 For many a mother's breath has swept
O'er Angostura's plain --
And long the pitying sky has wept
Above its moldered slain. 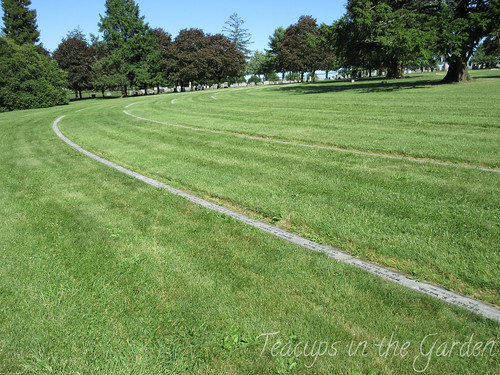 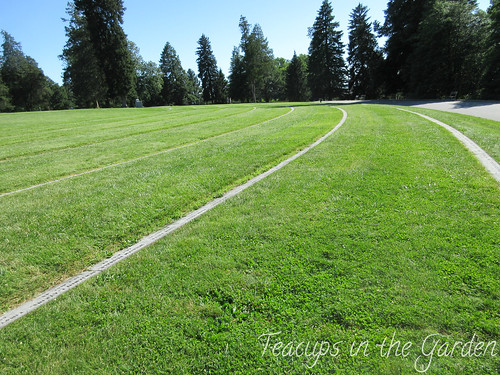 Sons of the Dark and Bloody Ground
Ye must not slumber there,
Where stranger steps and tongues resound
Along the heedless air. 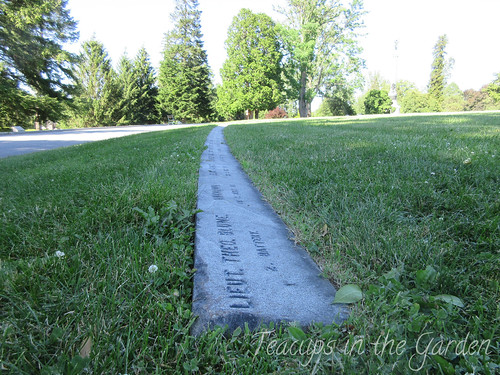 Your own proud land's heroic soil
Shall be your fitter grave;
She claims from war his richest spoil --
The ashes of her brave. 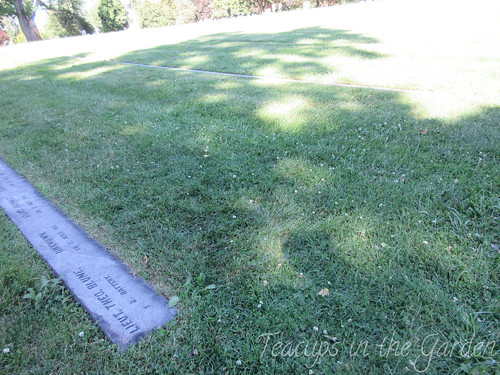 Thus 'neath their parent turf they rest,
Far from the gory field,
Borne to a Spartan mother's breast
On many a bloody shield; 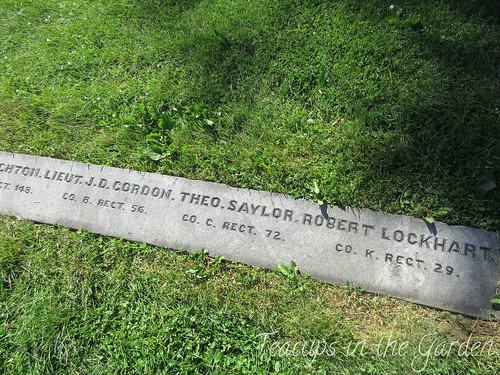 The sunshine of their native sky
Smiles sadly on them here,
And kindred eyes and hearts watch by
The heroes sepulcher. 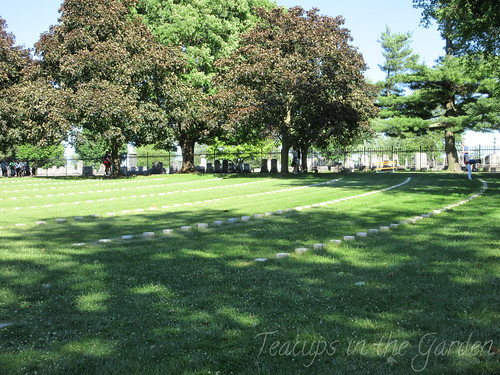 Rest on embalmed and sainted dead!
Dear as the blood ye gave;
No impious footstep shall here tread
The herbage of your grave;
Nor shall your glory be forgot
While fame her records keeps,
Or Honor points the hallowed spot
Where Valor proudly sleeps. 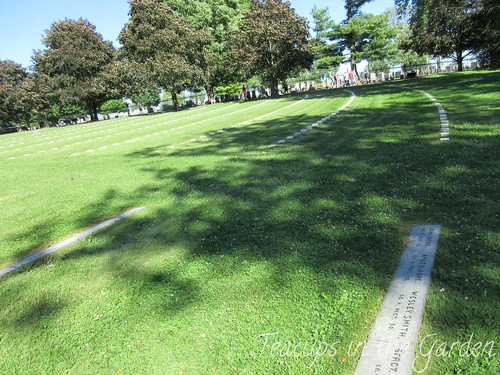 Yon marble minstrel's voiceless stone
In deathless song shall tell,
When many a vanquished ago has flown,
The story how ye fell;
Nor wreck, nor change, nor winter's blight,
Nor Time's remorseless doom,
Shall dim one ray of glory's light
That gilds your deathless tomb.
By Theodore O'Hara 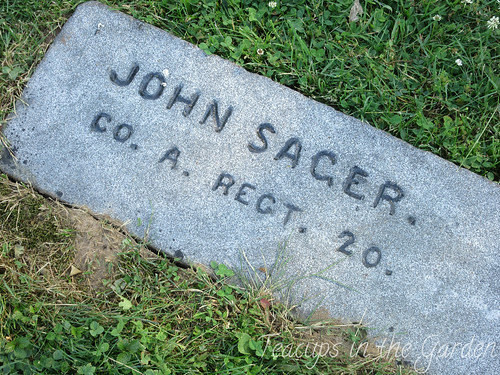 Now known as Remembrance Day, every November 19th remembers this cemetery and Lincoln's Gettysburg Address.
Posted by lahbluebonnet at 6:00 PM No comments: Links to this post

The Biggest and Brightest Supermoon in 68 Years


My super ambitious goal of the day, November 13, 2016, was to take pictures of the moon. Not just any moon, but the supermoon. And not just any supermoon but the biggest and brightest full moon since January 26, 1948. There won't be another one this close until November 25, 2034. In fact that sounds like the beginning of a time travel plot...inspired by a recent movie I saw about time travel to 2016 because of a rarely seen comet in 1945. (Journey Back to Christmas)

That's a long wait so I decided to do my best capturing stunning shots of a huge moon against the horizon. I highly anticipated sunset. However I got so completely caught up in cooking dinner that I forgot to look for the moon on the horizon. As soon as I realized my forgetfulness I grabbed my camera and ran out the back door. Alas, the moon in my backyard was of normal size, through a bit brighter. Later I saw incredible pictures others had taken. The next day was cloudy throughout. Even so, I did chase the moon a couple of mornings later while driving home around 9am. I had the moon in sight, large and pale white against a stunning blue sky with blazing leaves set in the foreground. I kept it in sight as I parked the van in the driveway, ran into the house to grab my camera and ran back outside to find...the blue sky and blazing leaves, but no moon. I lost my incredible moment.

Nevertheless, nothing ventured, nothing gained. I have these attempts taken on the evening of November 13.


Posted by lahbluebonnet at 9:29 PM No comments: Links to this post

Red, Blue, or We the People? 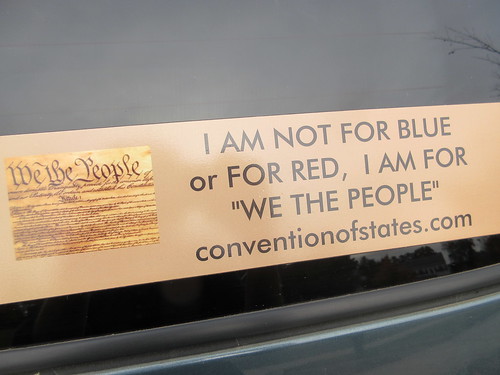 What a contentious election year! Anger. Finger-pointing. Accusations. Will it all end with the election? There are certain to be more disgruntled souls even after the election is over. Then what? However we look at it, it has most of us feeling red (anger) or blue (sadness). No matter who becomes president, we will still have these problems:

However I am feeling "we the people." In America we hold dear our power of "We the people" through voting, contacting our elected officials, and even running for office ourselves. However we have forgotten that there is another right that the people have.

Our Founding Fathers wrote Article V of the Constitution that empowers the people to petition their state legislatures to call for a Convention of States to amend the Constitution. The staggering national debt and the federal government taking power away from the states demands action. Through a non-partisan grassroots effort 8 states across America have already called for a Convention of States. Petitions are in process in several other states, including Virginia.

After I vote, I will be spending part of the day (after driving my kids to and from college and work, after all this is grassroots...many other grassroots volunteers will be doing the same) in the parking lot of my polling station sharing the news of the Convention of States with my neighbors. I will also be sharing an urgent action point...which is also applicable to any Virginian reading this post.

Here in Virginia, November is the urgent month of action. We are asking Virginians to call their state senator and e-mail them today, to ask them to support the call for a Convention of States. Eight other states have already called for a Convention of States. They are Alabama, Alaska, Florida, Georgia, Indiana, Louisiana, Oklahoma, and Tennessee. Will Virginia become number 9? We are so close!

Last winter the Virginia house passed the call for a Convention of States, however it stalled in the Senate. The state Senate is waiting to hear from their constituents because they are in committees this month reviewing which resolutions they are going to send to the floor for a vote. HJ3 (which is the name in Virginia given to our petition for a Convention of States) must pass out of this committee to the floor! However our Virginia senators need to hear from our constituents! If they don't send HJ3 to the floor for a vote, we have to start all over again in the house. Let's not lose all our hard work!
Oh, and if you are from another state, you can sign the petition too!
Posted by lahbluebonnet at 6:00 AM No comments: Links to this post