My Daughter's New Desk for a Shabby Chic Room

Last year when we were planning the remodel of my daughter's bedroom, we discussed the priority of getting a new desk. We only have birthday money and Christmas money to work with in the budget. After detailing a list of things that were necessary, the bookcase came first, for Christmas 2014 and birthday 2015. Then for only a small expense we repainted all of her furniture in summer 2015. Would she like a new desk for Christmas 2015? No, she decided to keep her old teeny tiny desk from when she was in elementary school years. Then last month the power went out in her room and the master bedroom until the electrician to fix things. Well, my daughter had quite a bit of college work to do, so she moved into her brother's room, since he was away at college. She got to use his new desk from his birthday 2015. Wow! She liked all the space. I asked if she'd like a new desk for her birthday 2016. Yes, indeed! In white to match the other furniture in her room.
So during her spring break, a week before her birthday, we assembled the desk for her. We got the cubicles in white at Target, just like we got for my son (except his are black.) The turquoise file boxes are also from Target.  Then we went to Lowes to get a sheet of nice aspen for the desktop, like we had gotten for my son's desk. My son had stained his sheet of aspen. I wanted to paint my daughter's white. However, it could be a bear to find the perfect white to match the white of the cubicles. We can't very well go opening various paint cans to find the right shade. The various shades of white aren't even premixed. I hoped to save money by using the can of paint we had used to paint her other furniture. There was half a gallon left. But would "Cream Delight" match? 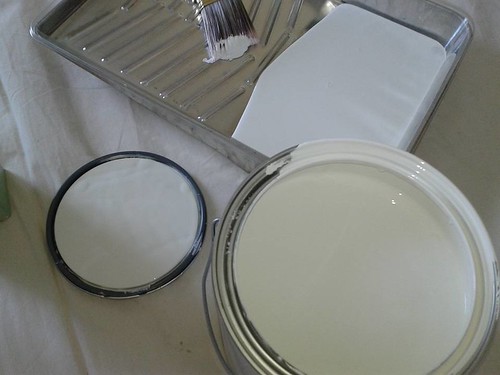 Before I painted the aspen board, I opened up the boxes to assemble the cubicles. When I pulled out the white boards, I held them against the furniture we had painted last summer. It was a perfect match! The can of paint in the garage would indeed work! Yea!

The aspen board in the garage, and thankfully the temperatures were nice, as if it were already spring. I painted one coat of paint on the board, then went upstairs to assemble the cubicles while the paint dried.


The next day I put a second coat of paint on the aspen board. Then we assembled the desk. She loved it! 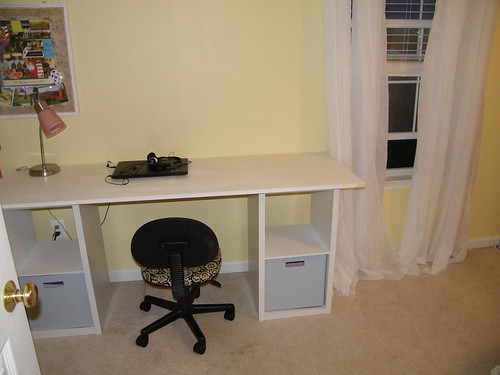 It was a week before her birthday, but the part of her room I am not showing was a mess because of all the piles that were created, that had to be moved from the old desk to the new desk. My daughter is quite busy between college and work, so spring break gave her a bit more breathing room to spring clean her room and move things around for a new desk!
at March 25, 2016 No comments: