Last summer when we visited Historic Occoquan we saw a mansion on a hill that was on private property. Beguiled we took lots of pictures of it. We wondered about the history of it. The bit on the historical marker wasn't enough. 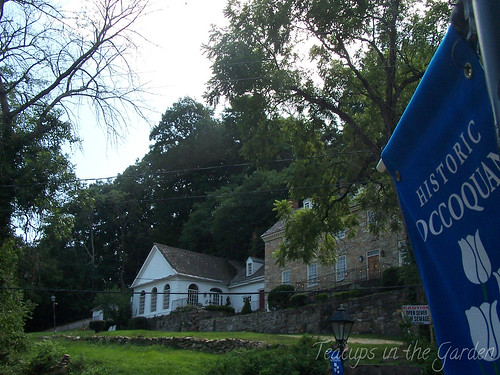 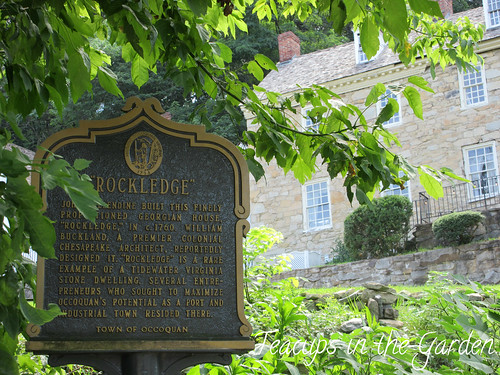 Then five months later I found out about free tours.

Rockledge Mansion has a long history. The first room told the colonial part. 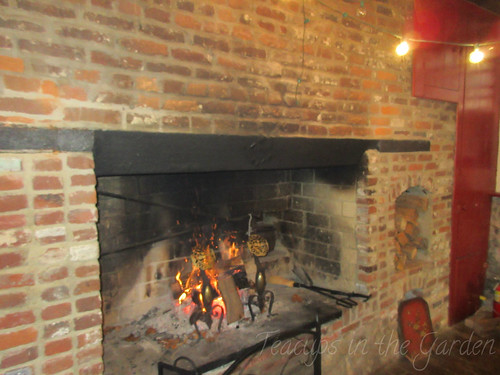 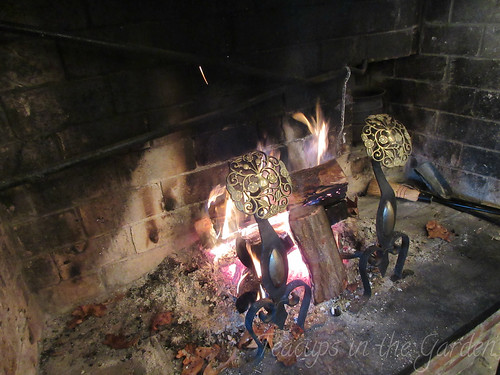 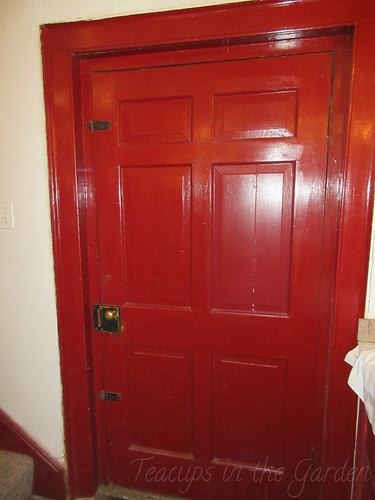 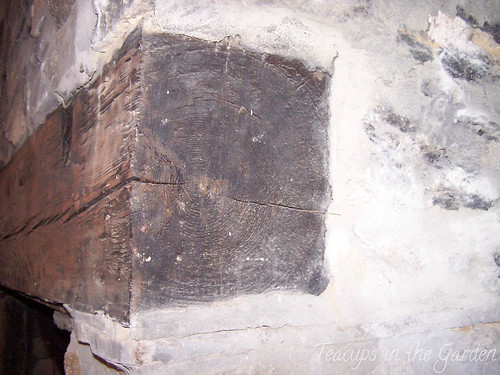 As we advanced through the mansion we entered the 19th century. This old house had been added to numerous times over the years, with different owners. By the end of the 20th century it had a major remodel which was destroyed by arson. 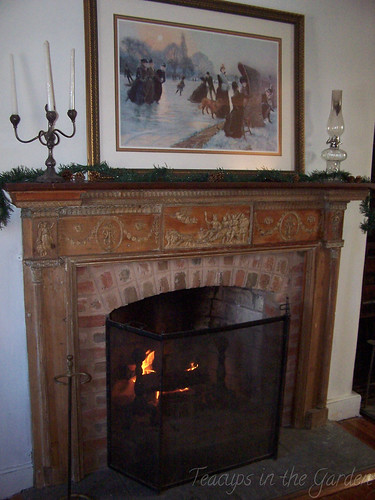 This lovely lady bought the house and her son, Lance Houghton, owns it now. He was the one giving the tour, which was excellent. He proudly showed off this picture of his mom, which I thought was really great. Quite fashionable. (And we all know I like fashions of the past!) 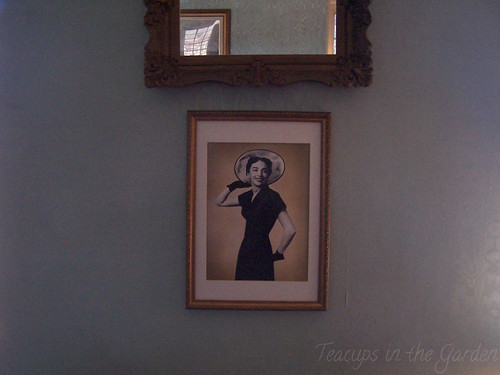 Loved this photo of Occoquan Village in the past. 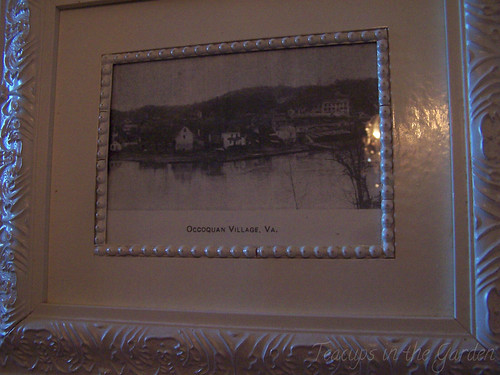 Because of the age and the past vandalism, the house continues to be in a great state of repair. 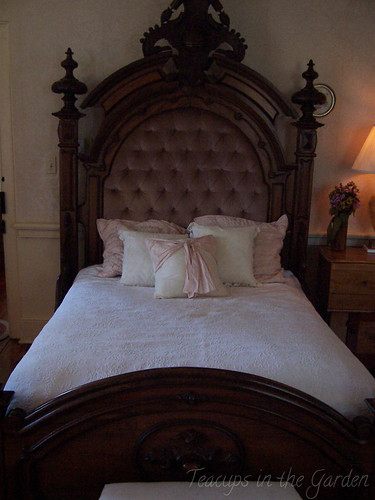 This is from the most recent addition that the family added for a wedding venue. 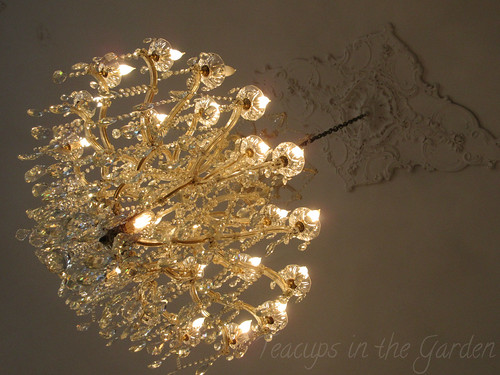 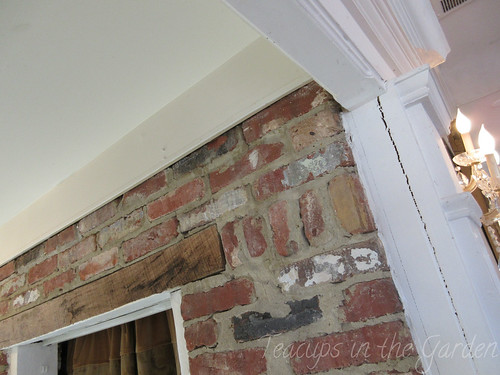 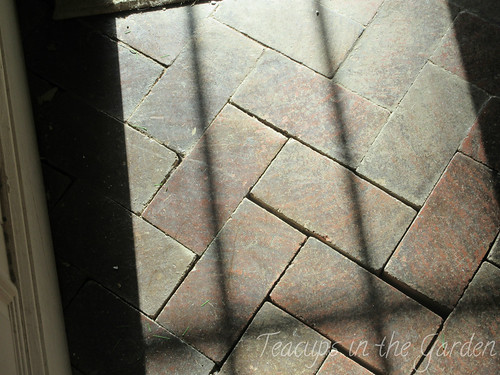 When we walked out the back, we saw grand evidence of the ledge upon and into which the mansion was built...hence its name of Rockledge Mansion. 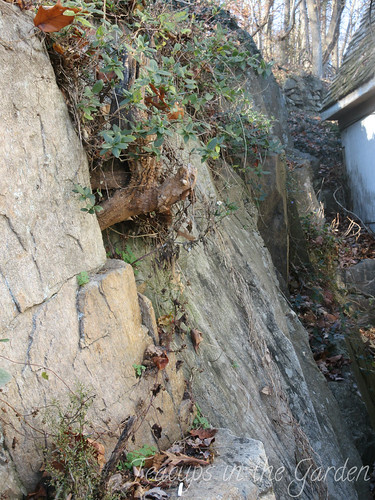 Proof that I was there... 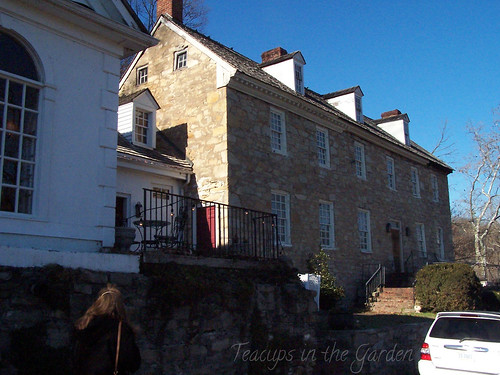 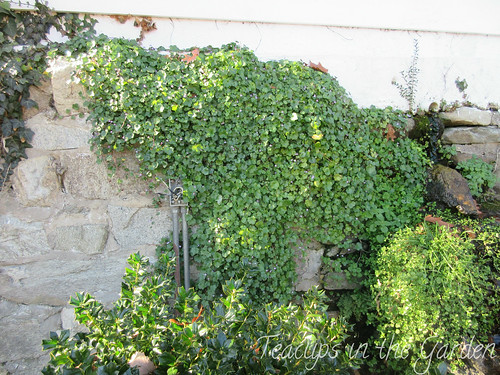 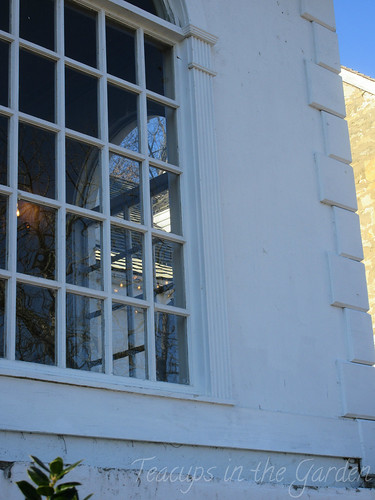 My favorite story I heard during the tour was surprisingly the Civil War story. They had a huge reenactment for it a few years ago which I'm sad that I had not known about. From the July 28, 1860 Alexandria Gazette...which was published two days later in the New York Times: Political Excitement in Virginia came the incredible story of the only Republican votes Abraham Lincoln received from Virginia's Prince William County months later. (Hmmm, sounds like today's politics!)

So...on the 4th of July, the oh so incredibly patriotic citizens of Occoquan (well, nearly 60 of them were from the area) erected a pole specifically to fly a particular banner in support of two candidates in the upcoming hotly contested presidential election: Abraham Lincoln and Hannibal Hamlin. Boy...did that stir up controversy!

The group who rose the flag was dubbed the Black Republicans. Interestingly, 1 Englishman and 3  free blacks were part of the group. The Republicans protected that flag with all their might...with muskets even!

Discontent grew into a meeting at the county seat in Brentsville, 21 miles away, where naysayers firmly resolved to tear down the flag on July 27th. Of course the Republicans got wind of this news, so they prepared themselves for that fateful day. One of them even contacted the governor for protection. The governor replied that this request to protect the flag "was about the most consummate piece of impudence and audacity that has ever come under our notice."

On the morning of the 27th, the Republicans raised first the American flag and then the Lincoln/Hamlin banner. They were also prepared to defend the flags with their firearms. At 3:30pm, the Prince William Cavalry arrived, led by Captain Thornton!

By the way, this liberty pole upon which the controversial flags flew, had been erected upon the property known as Rockledge Mansion, owned by a certain Quaker by name of Josepth T. Janney. While the cavalry and soldiers gathered around the pole, Janney came forward and declared that even though he did not share the Republican opinion, he did allow the use of his property for the flying of the banners. (Remember that Rockledge Mansion sits upon a hill, which allowed the flag to be seen from miles away.) Janney boldly requested protection for his property. Supporters of the flag presented their signed petitions to Captain Thornton, requesting that the flag be protected.

Undaunted, Captain Thornton gave the command. The axe came out. The pole was knocked down. The flags and remains of the pole were sent to Brentsville. (I wonder if it is still there!)  Oh, and their arms were confiscated.

Upon the November election four months later, Lincoln received 55 votes from Prince William County. All of those 55 votes came from Occoquan. Interestingly Lincoln also received 2 votes from Alexandria County, 24 from Fairfax County, and 11 from Loudon County. All of these counties comprise Northern Virginia.

Posted by lahbluebonnet at 5:50 PM