French Onion Soup as Historically Made by the Peasants

Since our next challenge in the Historical Food Fortnightly was "Soups, Gravies, and Sauces, I decided to make my favorite French Onion Soup. Instead of using stock, this soup uses only onions, water and seasonings, and of course bread and cheese, as the peasants would have hundreds of years ago. I first read of this historic recipe on Michael Ruhlman's food blog (he is one of the judges on Iron Chef America), where he mentioned the famed bouchons of Lyon, France where simple yet filling peasantry food abounds.  When I decided to make this recipe for this challenge, I did a bit more research into bouchons and French Onion Soup. Here I read about how centuries ago the peasants who labored in the silk industry for the aristocracy had hearty fare, such as French Onion Soup which are today served in Lyon's bistros called bouchons.   This Saveur article goes into great details about Lyon's bouchons and their simply yet hearty fare renown for pleasing many a palate. Finally The Thrifty Groove blog presents the history of the French Onion Soup, from the Ancient Romans and Greeks to the Middle Ages to the finesse of the French. Included are receipts, one from The French Cook, Francois Pierre la Varenne in 1651 ( and another from The Frugal Housewife in 1803.


I varied my own rendition of the recipe a bit differently from Michael Ruhlman, yet kept to the heart of his instructions to use NO broth. =) The happy result is a far more flavorful French Onion Soup, that is truely an onion soup. It's not a beef soup with onion added. Instead it is an onion soup as mild or strong as the cook's personal palette merely by the addition or cooking off of water. After all the tradition I have read of French peasantry food, I'm now wishing that for my literature challenge I had used the children's book, Stone Soup. I'm sure the resulting soup caused the French soldiers and peasants to say bon apetit!


I sliced 3-4 massively huge vidalia onions to saute in the heavy cooking pan in a bit of olive oil and salt. 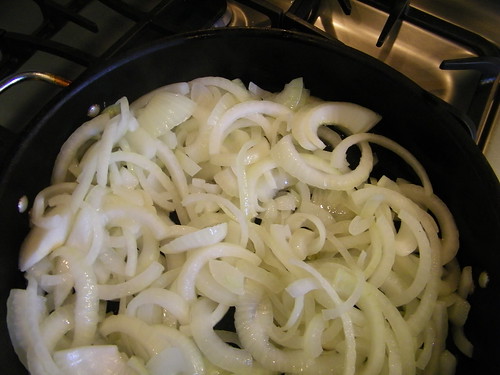 I turned the heat to a lower setting so they would not burn, yet they could carmelize over a few hours. For me this only took about 3 hours. I was surprised by how much they cooked down.  I'm adding more onions next time. 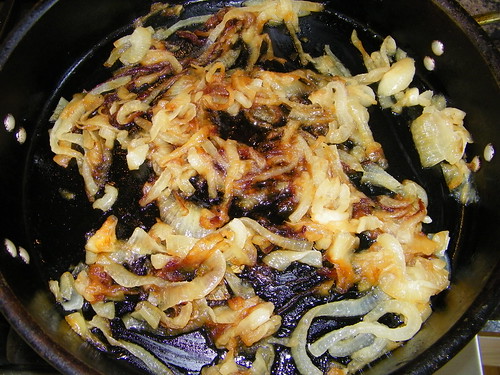 To this I added 6 cups of water, which filled the pan.  It was much more than Michael Ruhlman advised, but I wanted to make as much as I could. Within minutes the water started taking on the caramel color from the onions. Throughout the cooking process I sampled the broth until it reached a flavorful stage. I had indeed added too much water, but no problem. It easily cooks off. If a stronger flavor is desired, cook off more water. If a milder flavor is desired, add water or cook off less water. After the soup reached the flavor desired, I added salt and pepper to taste. 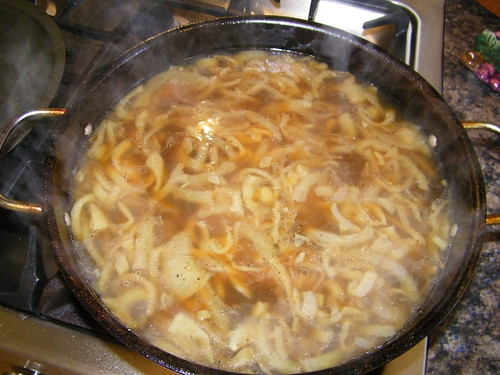 This is the first time I've ever used Gruyere Cheese... 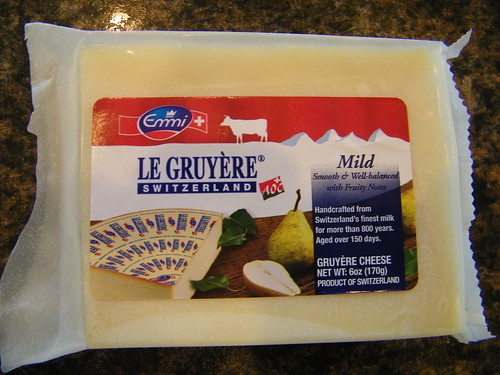 I grated the cheese and set it aside. 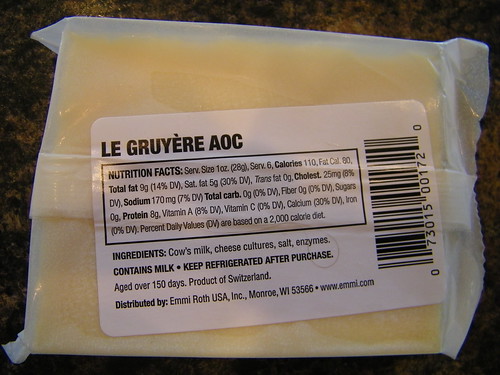 I cubed a white flour baguette but I had strongly considered a whole wheat baguette, which I'm thinking would have been what the peasants used. I finally decided the family might not eat the whole wheat bread, but at dinner I was assured they'd probably prefer the whole wheat. So we'll try that next time. While the onions were cooking I dried out the cubed baguette in the oven. Meanwhile I placed 3 oven/broiler safe soup bowls onto a large baking sheet, then I filled the bowls with the toasted croutons while the broiler was heating up. 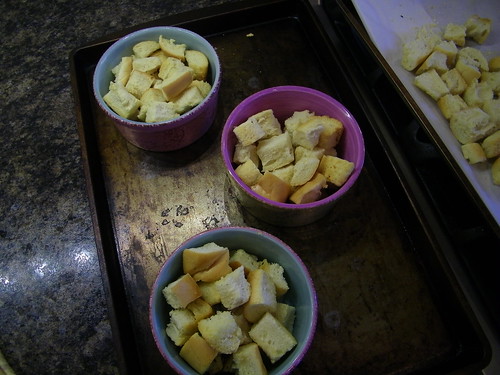 I ladeled soup on top of the croutons in the bowls... 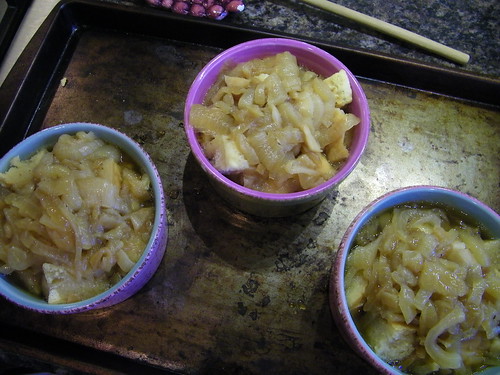 Then I topped the bowls with the grated Gruyere Cheese. Then I placed them under the broiler about 5 minutes, perhaps 10. Keep a close eye on them. You want the cheese to brown but not burn. The time varies according to oven. 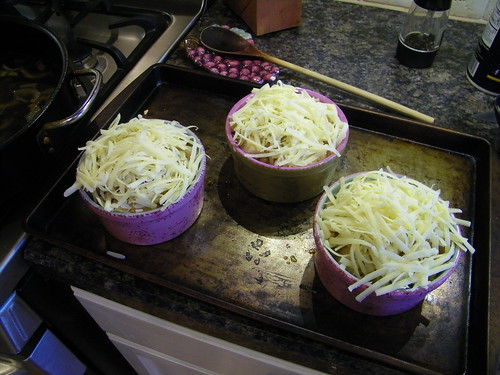 This is the toasty look that I like to take out from the broiler. It actually looked a bit more toasty than this in reality. 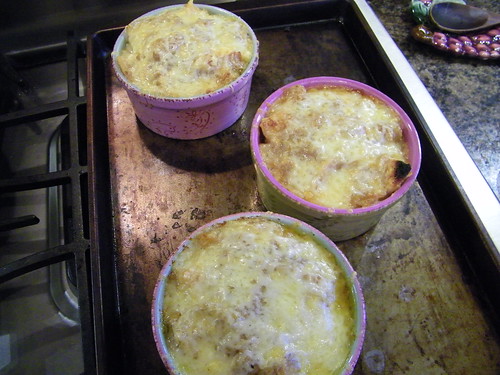 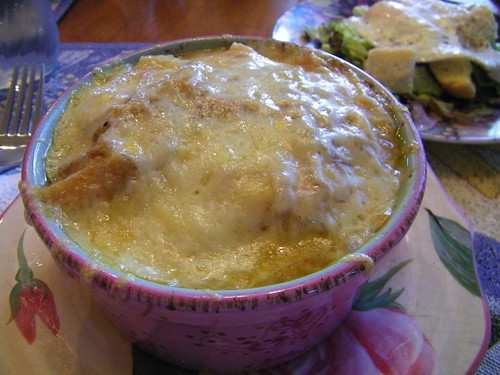 I served the soup with a red leaf toss salad with white wine vinaigrette, croutons and a soft cooked egg. 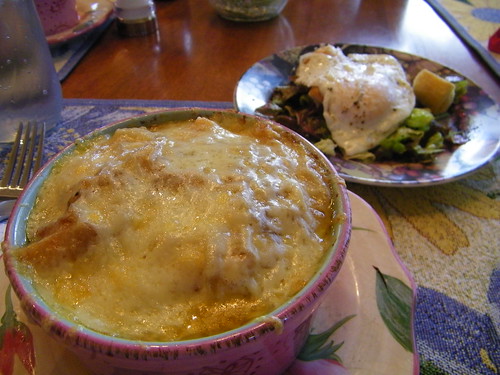 Oh, that soup looks so yummy... 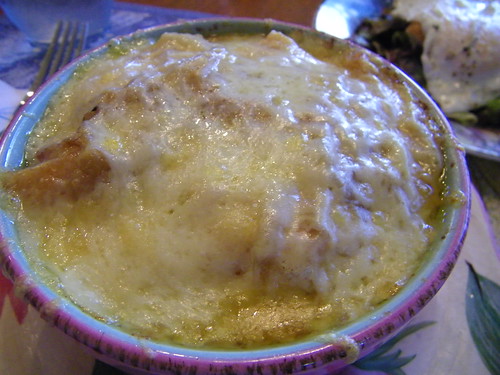 When you break into that egg the yolk becomes part of the vinaigrette... 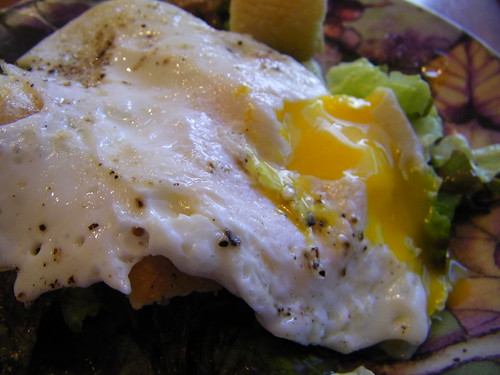 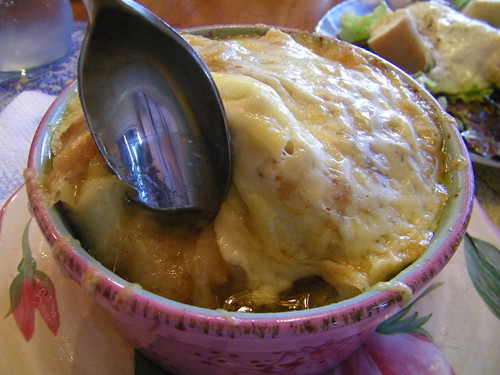 And now for the Historical Food Fortnightly Food Facts:

The Challenge: #2 Soup, Sauces and Gravies
The Recipe: Posted above with the photos, and linked to Michael Ruhlman's food blog, first link.
The Date/Year and Region: No one really knows but roughly 1651 Lyon, France and even before that.
How Did You Make It: Details posted above with photos, but basically with onions, water, salt and pepper, and addition of bread and cheese.
Time to Complete: About 6 hours.
How Successful Was It?: Delicious! I've actually made this once before so I knew it would be good to use for the challenge.
How Accurate is it? Very

Email ThisBlogThis!Share to TwitterShare to FacebookShare to Pinterest
Labels: Becoming History through Cooking, History F A Republic-Can We Keep It? 1797-1825