An Embroidered Colonial Pocket for my Daughter's Birthday

Ever hoping to inspire my daughter to needlework, I've been gifting her various kits for birthdays and Christmases. What could be better than a pocket kit from Colonial Williamsburg? It sat in the bottom of her pile of kits. Her birthday was coming up so I offered to embroider the pocket for my daughter, which brought more glee than the anticipation of doing it herself. Ta da! 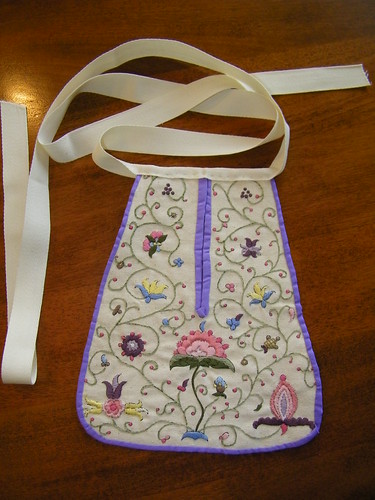 I took the kit to Colonial Williamsburg's President's Day weekend activities, to have something to do in my spare time. Because the weather was so awful, I did most of the work in the hotel at night, and at one of our lunching venues. I didn't complete it but got a good start on it. I've continued working on it in bits and pieces for the last few months.

Overall I was disappointed with the kit, because it is meant more as a modern interpretation for the modern seamstress. The pattern is based on the very same pocket from Costume Close-Up that I hope to reproduce. However this pocket is much smaller and therefore less practical. Although all the fabrics and threads are 100% natural fiber, they would not have been used in the 18th century. A twill fabric that easily ravels is supplied for the pocket along with cotton embroidery floss. Manufactured lines have been imprinted onto the fabric which I do not like this because it is difficult to cover the lines with thin embroidery floss. Wool yarn would have been easier to cover all the lines. Also yarn is easier to use to fill in space than thin thread. However that was a good challenge for me since I have a silk embroidered pin ball yet to complete from a Colonial Williamsburg Costume Design Center class I took on pin balls a few years ago.

With this pocket I played around with stitching different leaves and flower petals in different directions to see which effect I liked the best.  I'm a gardener too and variations of striation in leaves and petals, especially when light hits it, is a fun challenge to try to replicate with thread. One day I hope to have more time to play with shading and color. 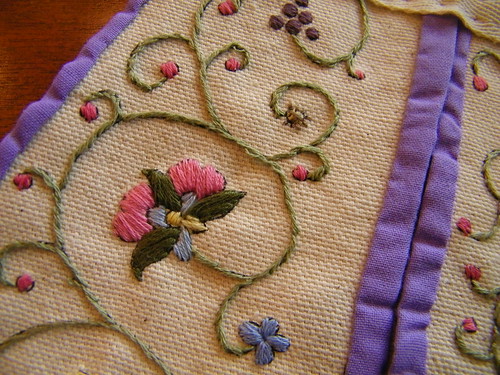 I did not finish the pocket as per instructions, because they were quite complicated (more than they needed to be) and used the sewing machine, whereas I worked my pocket with 100% hand stitching. I confess I had considered using the sewing machine, since the materials are not historically accurate, but the hand sewing went quickly and allowed me to watch television(Food Network).

I chose a 100% cotton purple binding, since purple is my daughter's favorite color. After I cut along the solid lines of the pocket, I was sad I had not left more seam allowance. I hadn't noticed how close the embroidery is done to the edge of the pocket. Therefore some of it is hidden underneath the binding. I cut the binding on the straight of grain, since 18th century frugality with expensive fabric rarely cut on the bias or specifically pieced. Also in 18th century manner, I pieced the binding. 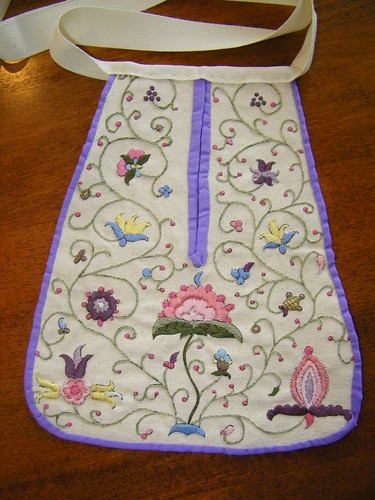 My daughter absolutely loves her pocket.  Meanwhile I am scheming future embroidery projects. I hope to reproduce this pocket from the original that is detailed in Costume Close-Up. I also hope to add to my wool yarn collection (courtesy of the Colonial Williamsburg sheep) from the Colonial Williamsburg Prentis Store. Because a collection of a proper range of colors is a small fortune, I've been buying one color at a time. I only have two colors right now (because of my accumulation of many assortments of lovelies for my various other future projects).

Now for the HSF details:

The Challenge: #9 Flora and Fauna

How historically accurate is it? somewhat, though based on an extant pocket in the CW collection